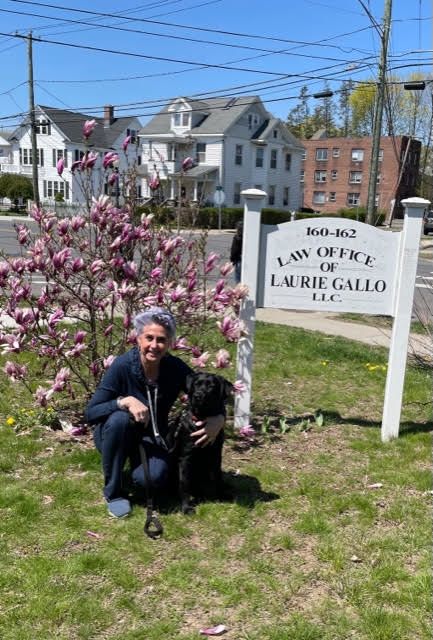 Laurie Gallo began practicing law in 1998 and opened her firm in 2012. She graduated from Iona College and the Elisabeth Haub School of Law at Pace University and spent several years working for a major insurance company. That experience makes her uniquely qualified to assist with navigating the complicated world of insurance claims and other required paperwork when dealing with a personal injury. She is a lawyer who calls it like she sees it and will always remain realistic about the outcome of your case.
More About Laurie

Professional, to the point, results-oriented

My case was not a common or easy one: custody over two minor children with myself, the mother, plannin to relocate to another continent with the children. From the very beginning Atty. Gallo was very clear and honest with me and made me aware of the potential challenges and complications that my case could encounter. She did not fail in her predictions: the Court Family Relations Dept. and a Guardian at Litem were involved, and my case ended up in trial with timelines much longer than I ever anticipated. Atty. Gallo guided and advised me well through the process. She performed exceptionally well during the trial, she was sharp and to the point. As a result, I was granted temporary sole custody at the end of the first day of a 3-day trial, and shared custody with permission to relocate with my two children as soon as the trial was over, with "de-facto" full power of decision making in situations of non-agreement between my self and the father of children.

Surprisingly, at several times during our relationship as lawer and client, Atty. Gallo gave me advice maybe not so much law-driven but more from the perspective of a woman and mother, and challenged me several times with questions that helped me make more reasonable decisions. I believe now that in cases involving children, this more "humane" approach and input from a lawyer can turn into a benefit for the client and is not necessarily a sign of weakness.

At the end of my long "journey" with Atty. Gallo, when the trial was over and I was ready with my luggage and my children to take the plane to another country, an unfortunate incident happened with my children. It was Sunday morning. Without any request from me to Atty. Gallo, she voluntarily showed up at the place of the incident and stayed the entire day by my side, giving me support. She had no obligation to do so, and yet opted to spend an entire holiday with me because she felt it was the right thing to do. She never mentioned this day to me after I left the country. But I understood at that time that behind her steel face there is an impressive professional with a neverending dose of hidden humanity that shows up when needed. I fully recommend Atty. Gallo for family cases.

I came to Laurie for help with termination of parental rights. She took a no-nonsense approach in answering all of my questions. She explained the law and the process to me, instead of telling me what I wanted to hear. In our first meeting, she told me everything I needed to know about the process, explored what potential outcomes would be depending on certain variables, and she made sure I understood. She also explained that the process could take a while (as much as a year or more) and that there was nothing we could do to speed up the process. She was responsive to my questions, acknowledged my concerns throughout the process, and kept me focused on what was in my control. When it finally came time for a hearing, I was 9 months pregnant with my second child and our hearing date was scheduled just 10 days shy of my due date. For obvious reasons, I was looking forward to putting this all to behind me before I gave birth. We appeared and, unfortunately, a clerical error on the court's part meant we could not move forward. The hearing was rescheduled for two days before Thanksgiving, which would mean I would have a 4-week old at home. I was not happy with this development, but there was nothing we could do to change it. When the second hearing date finally arrived, all parties scheduled to appear were present - aside from Laurie. Her office called and told me that she was running behind and would be about 10 minutes late, which was very out of character. When she arrived (about 7 minutes after our scheduled hearing time) she apologized for being late and explained that her father had passed away the day before and things were a bit chaotic at her house. I asked her if she wanted to reschedule the hearing and she said, "No, I know if we do not get this taken care of today you will not enjoy your holidays with your children. I'm okay." Her concern and empathy for my life far surpassed anything I've experienced. I really hope I do not have a need for a family law attorney anytime in the future, but if I did, Laurie would be my first call.

I needed a lawyer to get the job done.

Attourney Laurie Gallo had an excellent demeanor when I first met her. I was hesitant at first, due to the location and the considerable length of my court case, that she would be out of my price range. After switching lawyers due to an unpleasant experience, I finally hired her. She was the perfect choice.

Laurie and her team were responsive and got back to me with any questions I had or updates on the case. Communication and curtousy was consistent- whether it was with Jackie, Chris, or Laurie.

Laurie was fair. She told me all possible outcomes and did not obfusicate the case at hand. She was frank and to the point.

She was experienced. Her knowledge and confidence showed in the court room. She was gentle and not overbearing to the judge, while she got the job done with a humble attitude.

Behind her comportment in this case, was authentic passion and an empathic response to my case. She gave support and counseled when needed. This trait is important for any service given.

The team I hired was worth it. The women in that office are inspiring from behind the scenes to the court room. If I ever need them, I know they're a phone call away.

Attorney Gallo Cares About You

As a family law attorney and a divorced parent, Laurie understands the struggle you and your family face as you go through a divorce. She will work closely with you to develop a strategic plan to move forward and take the reins as she strives for the results you deserve. Laurie is known for being a pitbull and advocating passionately for her clients. She won’t sugar-coat the truth and tell you what you want to hear, but rather what you need to know.

Divorce can get complicated, but she’s here to keep it simple. She’ll cover the grounds for divorce and eligibility requirements in Connecticut for her clients.

There won’t be any punches pulled as she’s upfront about how long your divorce will take. Parenting time, visitation, joint or sole custody, and modifications of child custody agreements are all worries divorcing parents have. Laurie is detailed-oriented and will thoroughly investigate the specifics of your case to find the resolution that works for all parties involved. So, if you’re in Danbury, Connecticut, don’t wait any longer. Contact Laurie today and let her take the stress off you by handling the legal matters.